In February 2022, the VBS council were approached by the Oberwalliser Schwarznasenzucht Verband with the proposal of a training course to cover breed standards and grading of the Valais Blacknose sheep, which would take place at the beginning of March.

At first it did not seem achievable with the tight timescale and short notice. However, it was felt that the opportunity had to be taken or it would be 2023 before the prospect of another course would be offered.

Six council representatives enrolled for the course and travelled to Valais where they worked with Swiss society members in a knowledge transfer exercise to gain experience and accreditation.

The course content was intensive and involved theory and practical elements.  As students, we underwent continuous practical assessments of groups of ewes/ewe lambs and rams/ram lambs from different areas in Valais.

On the first day we were welcomed by Daniel Steiner, at the time president of SSZV (Schwarznasen Schaf Zucht Verband – the Valais Blacknose Breed Society) along with Rolf Kalbermatten (Vice President) and experts Richard Zieter, Beat Schnydrig, Erwin Pfammater.

Members of the Gamsen Valais Blacknose Club joined us and provided the first group of sheep for the theory and practical assessments.  We were also joined by Silvan Stockli who provided a translation service for the duration of the course.

We were given an overview of the Swiss Valais blacknose breed society, the flockbook and sheep figures.  This followed on to taking us through the breed characteristics and breed standards of the sheep which is broken down into three main categories: overall appearance, conformation, and wool.  The experts took a category each and explained in detail.

We then moved to the group of sheep where we began the grading exercises.  We were split in to small groups to work our way through each sheep.  Experts grade in pairs, but for the purpose of training we marked our own grades individually.  We were told that ‘erste blick’ is key – this is your first impression when the sheep is presented to you.

When we had finished grading all sheep we had to report back to the experts and explain the points which we had awarded, furthermore give reasoning behind any points which we had deducted.  The expert would concur or explain where he felt he did not agree.

To finish off the first day, we gathered round the table for questions, discussion, and feedback.  We had a lot to digest and looked forward to putting it in to practice again the next day.

The second day of the course followed a similar format to the day before.  We began with theory work and recapping on the breed characteristics.  Another group of sheep were provided for us to grade.  Again, we had to explain why we awarded the points that we did.  The day concluded with a discussion providing an opportunity to clarify any areas of uncertainty or ask questions

On the third day we met with members from Glis & Gamsen Valais Blacknkose clubs at the training field where they had provided additional sheep for another grading exercise.  We graded the sheep and were then assessed based on the points we had awarded and the explanations we gave based on those points.

The group then went to Blatten where we visited breeder and expert Erwin Pfammatter.  Groups of local breeders come together on the day before Widdermarkt to wash and prepare their rams for the show and line their rams up for display.

At Erwin’s house, there were many other breeders with their rams. This was a rather intimidating experience to begin with as the breeders were gathered around us as we graded their prized rams.  We had an audience.  We each took turn to grade the line of rams and deliver the points to the expert with supported explanations why and learn if our assessments were correct.  It was a good feeling to receive a thumbs up and a firm nod from the expert to acknowledge that we were correct, and he concurred.

On the final day, Widdermarkt arrived, and it was time to apply all that we had learned with the experts that week.

On arrival at Widdermarkt, the scene was quite spectacular.  400 rams lined up in their categories, eldest to youngest.  We reported to the show office where the society committee were gathered, and Daniel Steiner welcomed everyone.

We were split in to pairs and each assigned an expert and his team to shadow.  We were given a printed list of entered rams for our category to record our points.

The experts approach each ram with the same initial checks; ear tag number corresponds to that entered, mouth, fleece, testicles and under the tail to ensure there is no black.  They look at the overall appearance, the fleece, markings, conformation, how the animal walks and stands.

During grading we were not permitted to influence the experts’ grading in any way and had to keep a short distance to allow them space to grade.  The experts took opportunities as we moved through the line to check how we were doing and look at the grades which we had scored.  We received affirmation with a concrete nod.

When possible, experts would take a minute to summarise and explain the points they had awarded and ensure we understood why they had made deductions and that we had also picked up on them.

It is a very fast paced process, and the experts work through the sheep quickly.

The maximum point rams are pulled out and grouped together at the front of the line.  At the end of grading the experts go over them again to make sure they are satisfied to award maximum points.

Once grading of all categories was completed, we were given copies of the results to check against our own grading scores to assess how we had done.  Overall, everyone was very happy with their work and assured by the level of correctness achieved.

The maximum point rams were taken up on to the stage for prize giving and photos.

We were then invited to the show office where Daniel Steiner gave thanks to all involved for their help and support in producing the event and for those who made the training course possible.

We were each presented with a certificate to recognise that we had completed the course successfully. 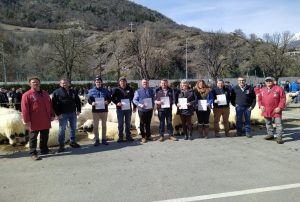 Daniel Steiner explained that what we had learned on the course will enable us to put grading in to practice in the UK and be confident in taking the steps to operate independently.

The course has been hugely beneficial, and it is the objective of VBS to send individuals where possible to attend future courses hosted by the Swiss society to increase knowledge and expertise.

VBS would like to thank the Oberwalliser Schwarznasenzucht Verband for taking the time to put the course together and providing the opportunity to learn first-hand from the experts and generations of blacknose breeders.

VBS would also like to thank the Schnydrig family for hosting the group and making everyone feel so welcome.