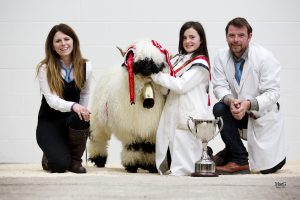 The first ever show and sale dedicated to the rare Swiss Valais Blacknose sheep attracted in hundreds of visitors, all intrigued to find out more about the ‘cutest sheep in the world’. The Supreme Overall Champion title was taken by Raymond Irvine and Jenni McAllister with Highland Breeze, who was also awarded Female Champion.

Hosted by the UK Valais Blacknose Sheep Society (VBSSUK) this inaugural event saw over 150 Valais Blacknose sheep being shown at Borderway Mart, Carlisle, for what can only be described as a spectacular showcase of an extraordinary breed.

Breeders competed across 13 classes with the winners of each class being presented with a traditional Swiss bell. In order to maintain the same standards the breed are held to in their home country, the society opted to mirror the Swiss system and based the event on the hugely popular ‘Miss Visp’ contest which is held in Valais annually. This also included an ensemble of eight highly qualified Swiss judges, who were able to provide farmers with information and encouragement to reach the levels expected by their Swiss counterparts. 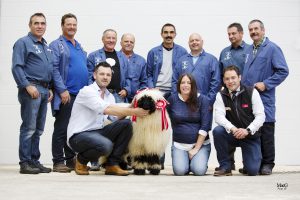 Speaking afterwards, Raymond said: “The Valais Blacknose Sheep Society UK had come so far in such a small amount of time. To be crowned the Overall Champion is a great honour and to do it with so many great sheep at the event has been a dream. Jenni and I are over the moon, it has not really sunk in!”

It was a successful day all round for Scottish breeders Raymond and Jenni, who received the top price in the sale ring with an in-lamb gimmer which sold for £3,600. With an excellent offering of sheep from breeders travelling from far and wide, this is the biggest sale of Valais Blacknose sheep to take place in the UK.

Commenting on the sale on behalf of Harrison and Hetherington, Heather Pritchard said: “We were absolutely delighted to be hosting the first ever dedicated sale of Valais Balcknose Sheep in the UK. There was a huge amount of interest from across the UK and Ireland, and without a doubt it is creating much attention.

The Valais Blacknose is an incredibly rare breed with only 12,000 registered in their native country. The VBSSUK was first formed by Jenni McAllister, Raymond Irvine and Jamie Wood in 2014 in a bid to protect and promote the breed here in the UK. The society has gone from strength to strength, now representing 47 members in total, with the number of Valais sheep in the UK on the increase.

Jamie Wood, co-president of the VBSSUK said: “We are thrilled with the success of our first Valais Blacknose show and sale. We received a fantastic number of entries and the interest and buzz surrounding the breed is incredible, with people travelling from as far afield as New Zealand and the USA.

“The judges were overwhelmed with the quality being bred here in the UK, and the hard work put in by the breeders has definitely paid off, with some being awarded maximum points.

“Huge thanks must go to our mainline sponsors, Strutt and Parker, and to Tomintoul Distillery who donated the Overall Supreme Champion cup. Thanks must also go to all individual class sponsors, without whom this event would not have been possible.

“The event will certainly go down as one of the most unique shows to take place in Britain, especially as it was the first time Valais Blacknose sheep have been shown by British breeders on home soil. It is now important that we replicate this show every year to help the quality of the stock move forwards in the right direction.”
Whether Valais Blacknose sheep end up as an alternative farmer’s four legged friend, or another breed of sheep to add to the huge following of rare breed sheep in the UK, the Valais is destined to be a popular sight for some time to come.