Home/Featured, News/Record Number of Entries at Blacknose Beauties 2022
Previous Next

Record number of entries at Blacknose Beauties National Show & Sale as unique sheep continues to capture the hearts of the nation.

Taking place on Friday 19th and Saturday 20th August, the Blacknose Beauties National Show & Sale at H&H Borderway Mart, Carlisle will return to its full schedule for the first time since 2019.

The two-day event is the pinnacle event in the Valais Blacknose Show calendar and the largest celebration of the UK’s fastest growing sheep breed. Once again, we have a varied and full two days of hotly contested competitions, trade stalls, and a public BBQ, together with lots of opportunities to observe, listen and learn new ideas and experiences. A great day out for families, breed enthusiasts and smallholders, the Show has something for everyone to enjoy.

This year’s schedule sees the return of sheep grading, an adopted points system from Valais, Switzerland which is designed to ensure that the highest breed standards are maintained in Britain. Grading will be performed for the first time in the show’s history by certified UK grading judges who have undergone training with Oberwalliser Schwarznasen Schafzuchtverband, the Swiss Upper Valais Sheep Breeders Association. The introduction of UK grading demonstrates the Society’s progression in becoming self-sufficient and reflects its commitment to uphold and preserve these time old Swiss traditions in close collaboration with the Swiss Breed Society.

As part of the Society’s continued educational focus there will be an opportunity to attend a grading demonstration aimed at sharing insights into what makes the perfect show animal and explanation of how points are awarded during the grading process. This session will be presented by the grading judges Mr David Hodge, Joint VBS Chairman and Mr Phillip Garrod, VBS Committee Member and host Marita Tauni (Blacknose breeder from Sweden).

There will also be an opportunity to purchase one of these highly sought-after animals, with ewes and rams being offered for sale. The Society hopes to repeat the huge success of last year’s sale which saw 72 Blacknose Valais sheep go under the hammer and Welsh breeders Gerallt and Kerry Jones’s ram Snowdonia Goliath top the sale, selling for 14,000gns, setting a new overall breed record. Following at 10,500gns and setting a new female breed record was Jenni McAllister and Raymond Irvine’s Highland Harmonie, with Highland Hendrix selling at 9,000gns. Other notable sales were Prendwick Invinsible bred by Jamie Wood sold at 9,000gns with Adam Kirkbride’s Cumberland Isa achieving 8,500gns.

Commenting on the upcoming Show & Sale, Raymond Irvine, Joint VBS Chairman said: “Preparations are well under way for this year’s event and with membership now reaching over 800 the entry response has been phenomenal, the highest to date. It is clear, that our members are eager to be back competing once again in the hope of taking home the much sought-after National title and cup and that these unique sheep continue to capture the heart of the nation. We are also fortunate to have tremendous backing from all our competitors, sponsors, traders, and volunteers, and are ever grateful for their continued support. With only few weeks to go we look forward to welcoming everyone back to Carlisle this August.”

The 2022 Show and Sale has free admission and parking.
qualify for sale entry: Maximum points must be awarded or no more than one points in each category to be deducted when graded.
On August 19, 7pm there will be a BBQ which is open to the public – please note BBQ tickets will need to be purchased in advance via the website: BB2022 BBQ Tickets 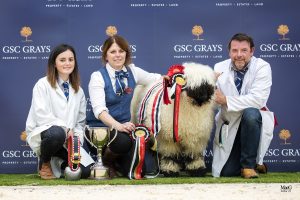 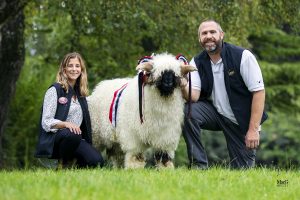